Under the rules of golf, a lost ball means you take a one shot penalty and go back to the spot you hit the shot from and play a second ball. All that takes time and frustrates your playing partners. If you are like me and my playing companions we forego going back, just take a penalty and move on but those penalties add up as does the cost of replacing the lost balls. So if you tend to spray the ball around the course and your foursome spends a lot of time looking for golf balls, download Golf Ball Finder. This free universal app runs on iOS 6.0 or later.

The app utilizes the camera in your phone and adds a special blue filter that makes golf balls stand out against the background. The ground on a course consists of dirt, grass, twigs, leaves, etc. These are mostly colored in shades of brown, green, and black. The special blue filter in Golf Ball Finder cuts out all the light reflecting from those items and leaves just the blue end of the spectrum. With all of those particular wavelengths eliminated, it leaves the white of the golf ball to be highlighted and become
much more visible. 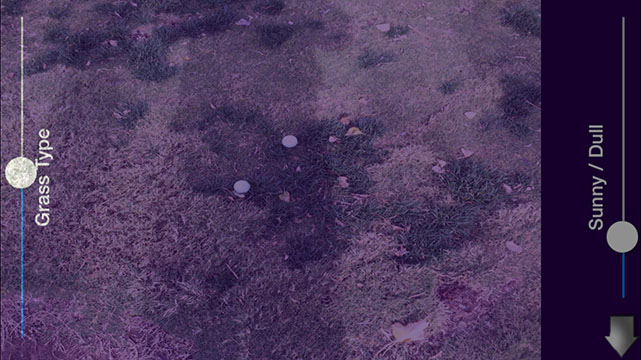 As you can see in the picture above, your camera screen will be all blue but the two white golf balls are clearly visible while other items such as grass and leaves are just dark areas. So when you are unsure just where you ball is, start the app and aim the camera in the general area you think the ball will be found. The blue filter eliminates the greens of the grass and browns of dried grass and dirt and highlights to golf balls. The app offers a couple of adjustments too. One is for sky conditions and allows users to go from bright and sunny skies to duller move overcast ones. Users can also adjust for the grass and foliage in the area.

I think Golf Ball Finder does what it sets out to do in many instances but doesn’t mean you will never lose another golf ball. To be seen the balls need to be visible to the camera so balls hit into tall grass or bushes will be a problem. Additionally during my testing with the sun at my back I had issues seeing anything once the blue screen was up. I could see the normal screens on the app but once I popped up the blue screen all I saw was a dark screen even though the camera was pointed directly at my two golf balls.

The best way to stop losing balls is to practice more and keep the ball on the short grass. Until then, Golf Ball Finder might be able to cut down on lost balls and strokes.